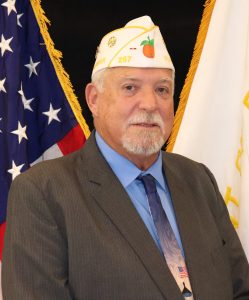 March 2020
The summit was a great event in February. There were a lot of riders and family members that attended and brought back to their post great information to be carried forward. The challenge 22 event in Avon Park was another great event with numerous vendors from different areas to give a helping hand. Thank you family 69 for the hospitality.

Had a real nice visit in the 17th Dist. The hospitality and welcome were a treat and it was nice to see the comeback District as they are called now. Headed down to Marco Island to post 404 and the opening ceremonies on the wall that heals. Was a guest speaker and was well attended by the whole community. This is a ¾ replica of the wall in Washington D.C. and very well put together.

Attended the Mardi gras event in Dunedin and the family from post 275 did not disappoint as always. They did their float as a tank which surprised me very much and it was well done. Probably 40,000 people were at the parade. We have a very busy March coming up. DC visit, Lake Nona visit, Oratorical contest, 4th Dist. visit, Gainesville hospital visit, Northern area ball Welcome home Vietnam and the race to the top.

As you see we stay busy. I look forward to seeing you around the state and please be safe and THANK YOU all for what you do

November 5, 2019
To: Members of The American Legion, Department of Florida

Below you will find a document entitled Appointments to National Commissions and Committees. You will see two (2) columns one titled “Committee Selection” which represents the work of the committee, you, the Department membership created by the above motion. The second column defined as “NEC Selection” defines the individuals appointed to the committee. NEC Boland submitted his list ignoring the list you, the membership demanded. The National Executive Committee Member (NEC) Dennis Boland states he has nothing to do with appointments.

Seems Past National Commander Jake Comer disagrees. In his message to our Alternate National Executive Committee member Art Schwabe, PNC Mr. Comer states” Disappointing to realize that you as ALT. NEC would not get up and remind the “haters of the national constitution” regarding NEC recommendations to the natl. cmdr (National Commander) who is the only one eligible to make appointments. Why is PNC Jake Comer involved? What position does he hold?

Long and the short of it, 72% of your Committee for National Commissions/Committee Appointments and Call-in selections were ignored by your National Executive Committee Member Mr. Boland. This is just to let you know how much your collective opinion means to NEC member Boland. 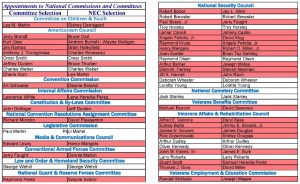 Please note, all submissions will be presented to the Commander and are not guaranteed.

Through PROJECT: VetRelief we offer a hand up, not a hand out, to strengthen our service members with dignity and empower them to light the way for the next generation of veterans.