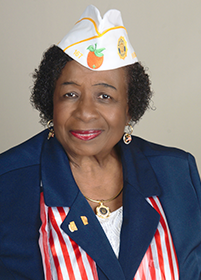 Eunice M. Butts, a Legionnaire from Carmichael-Lagree Post 167 in Tampa, Florida, was elected Department Commander on June 18, 2022, in Orlando, FL, during the 103rd Department Convention. Commander Butts is a thirty-seven-year continuous member, earning her eligibility through service to her country in the U.S. Air Force during the Vietnam War Era. She also served in the U.S. Air Force Reserves and the Alabama National Guard. She is the first African American woman to move through leadership ranks to become the elected Commander for The American Legion, Department of Florida.

Commander Butts was born on July 28, 1944, in St. Petersburg, Florida, to the late Tommie and Martha Butts. Eunice graduated from Middleton High School in Tampa, Florida, in 1962, where she was the first to sing opera there. She furthered her education and attended Gibbs Jr. College in St. Petersburg on a music scholarship.

Commander Butts is active in the local community. She is the Director VIP for Twenty and Four “The Honor Society of Women Legionnaires” Florida Echelon 5 of as well as a member of the First Union Baptist Church in Tampa, Florida. She has received many accolades, certificates, and awards for unselfish giving to her community, state, and nation. On May 4, 2013, she received the “Doctor William Leckie Award” from the Buffalo Soldiers in recognition of her outstanding contributions, dedications, and accomplishments that enriched the lives of many in her community.

Commander Butts is the proud mother of 2 sons, Robert and Edward, one daughter, Franjernera, and three grandchildren.

Commander Butts has dedicated her life in service to her community, state, and nation, with mentoring children being her number one passion. Her passion for mentoring children was featured in the February 2016 Legion Magazine, “I Am The American Legion”. The late Mrs. Willie Mae Williams, known as the “Veterans Lady”, was passionate about keeping the role of women’s service in the military at the forefront. Mrs. Williams passed that legacy to Commander Butts, who graciously accepted the challenge. Commander Butts finds it very rewarding traveling the state of Florida and speaking with veterans. Her primary goal is to enlighten soon-to-be discharged service members and our veterans about the many advantages and opportunities in their communities. In addition, she will carry the message of helpfulness and love with all that The American Legion has to offer our veterans, youth, and communities.

Her theme as Department Commander is “God, Family and Courage”, and her fundraising project will be PROJECT: VetRelief and Jackson In Action 83 Foundation. PROJECT: VetRelief is a program of The American Legion, Department of Florida. Its mission is to provide a Legion of support for our service men and women when they find themselves in financial distress. Jackson In Action 83 Foundation supports military families, focusing on the children’s educational, emotional, and physical health.