The following are the present donations from June 1, 2019 to November 8, 2019. Each organization with the highest donation on May 31, 2020 will be awarded the Garland Murphy Shadow Box award.

Below shows 1st to 3rd place in donations:

All donations have to be in by May 31, 2020 to qualify for the Garland Murphy and U.S. Udie Grant awards.

The American Legion was founded on four pillars: Veterans Affairs & Rehabilitation, National Security, Americanism, and Children & Youth. Today, those pillars remain at the Legion’s core as the organization continues its commitment to our Nation’s veterans, its servicemembers, their families, the youth of America, and ordinary citizens. The United States Mint is proud to mark The American Legion’s extraordinary milestone—a century of dedication—with a new ensemble of commemorative coins.

Youth Education and Scholarships
During the month of October a total of 15 national-level scholarships totaling $35,403 were disbursed as two-party checks to youth and their academic institutions. 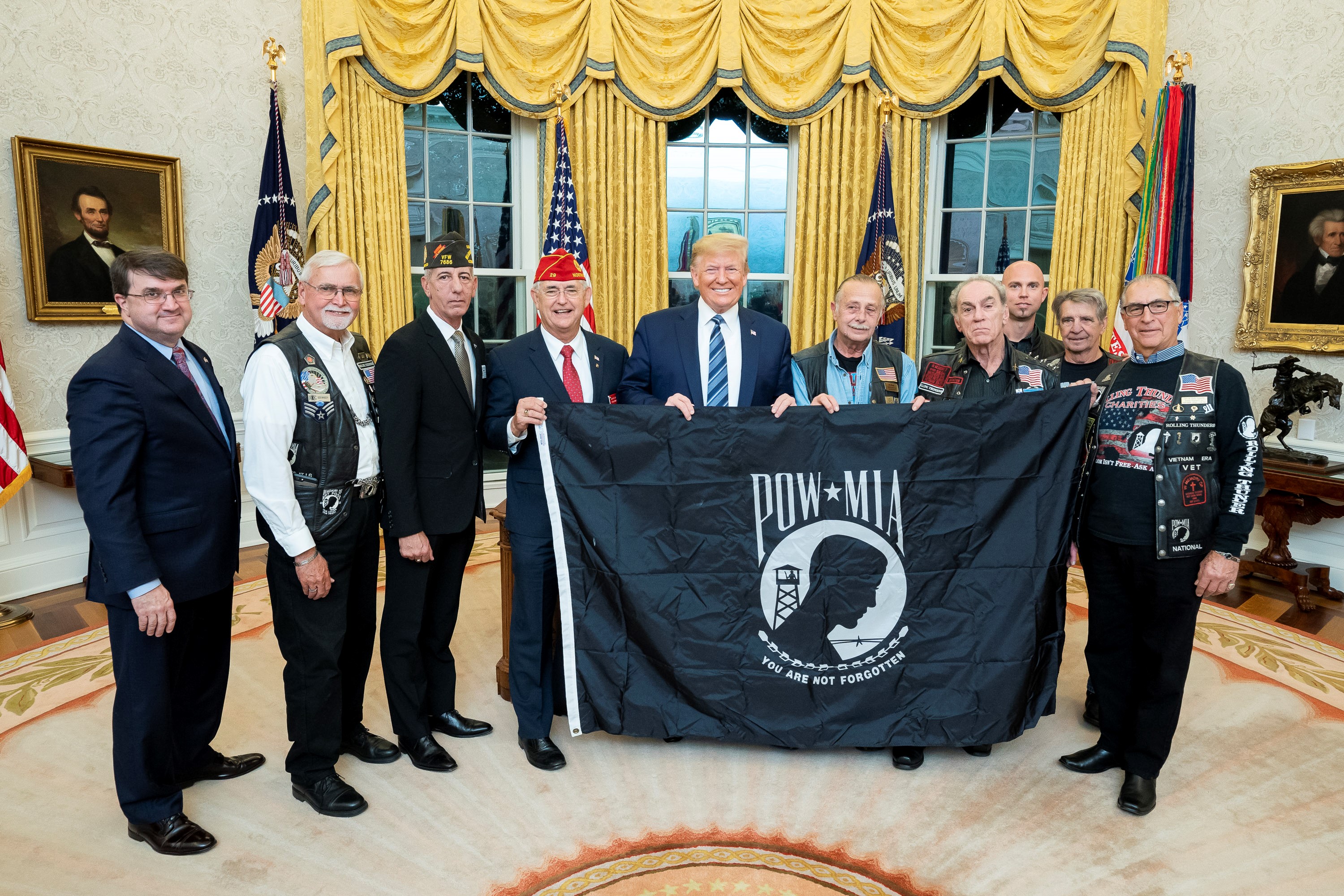 (WASHINGTON, November 8, 2019) — The head of the nation’s largest veterans organization thanked President Trump for signing a bipartisan act which will require certain prominent federal properties to display the POW/MIA Flag every day with the U.S. Flag.

“Yesterday I was humbled to stand with my fellow veterans inside the Oval Office and watch the president of the United States sign this symbolic but important legislation,” said American Legion National Commander James W. “Bill” Oxford. “It is important that Americans never forget that there are still more than 82,000 men and women who were taken prisoner or never had a full accounting. The American Legion reveres their memory and will continue to honor them at all of our meetings. I plan to visit the headquarters of the Defense POW/MIA Accounting Agency later this month to observe their work firsthand. DPAA does a remarkable job of identifying and repatriating so many heroes who paid the ultimate price for freedom. The American Legion is eager to explore additional ways to lend our support.”

“We are saddened to learn of the passing of this distinguished leader in Congress,” said The American Legion National Commander James W. “Bill” Oxford. “He was a lifelong passionate champion of civil rights. He strived every day to make his country a better place and his voice will continue to resonate in congressional halls for decades to come. He will be missed by many.”

With a current membership of nearly two million wartime veterans, The American Legion was founded in 1919 on the four pillars of a strong national security, veterans affairs, patriotic youth programs and Americanism. Legionnaires work for the betterment of their communities through nearly 13,000 posts worldwide. From the drafting of the original GI Bill to the creation of the Department of Veterans Affairs, The American Legion is the most influential voice for America’s veterans. The American Legion, www.legion.org, will be celebrating its centennial through Veteran Day.

“The American Legion lost more than a national treasurer today. We lost a treasure. George A. Buskirk was the kindest of gentlemen. We will certainly miss his sound financial leadership, but we will mostly miss our time with this affable, decent and smart man. He served his country during the Vietnam War and rose through the ranks of the Indiana National Guard to become its adjutant general. His intellect was without question. A senior executive in the banking industry, we were fortunate to have this great Legionnaire as our national treasurer for 21 years. We were more fortunate to have known him. Our heartfelt condolences and prayers are extended to the Buskirk family. We shall miss him.” 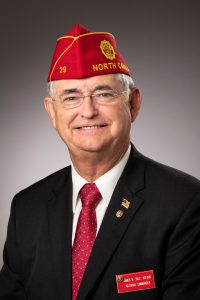 To my fellow Legionnaires in Florida,

This is an exciting time for our American Legion. This year, we passed a milestone that very few organizations ever get to accomplish: a centennial. Although we have a truly remarkable history that no organization can match, I like to remember the title of an old song, “You Ain’t Seen Nothing Yet!”

Our first century demonstrated the power that a large group of veterans can have in shaping national policy and communities from coast-to-coast and even regions overseas. In the early years, these endeavors succeeded without the use of widespread air travel, universal telephones or even national highways.

As we enter our second century, think of what we can accomplish through the use of social media, telecommunications and technologies in store for us that we cannot even begin to fathom. The theme for my year is a foundation for the future. And the main ingredient in the foundation is our membership.

We fought for passage of the LEGION Act not as a membership tool but because of the millions of veterans who served honorably during periods not recognized by Congress. Approximately 1,600 brave men and women were killed or wounded during hostile operations that occurred during those periods from the end of World War II to the beginning of the Gulf War. They too earned the right to be called “Legionnaires.” We would be foolish not to welcome the estimated 4.2 million living veterans from those periods into our ranks. When you consider all of their relatives, our American Legion Family can grow exponentially.

Even as we build a foundation for the future, our founding pillars and values remain the same. In my own shorthand, I like to refer to these pillars as V-DAY – that’s Veterans, Defense, Americanism and Youth.

V-DAY is what you all do every day when members of your department volunteer at the local VA, advocate for the needs of our military, retire an unserviceable American flag, or sponsor a teenager in one of our great youth programs.

I know that your department will continue to explore ways in which The American Legion will continue to serve America by combining our traditional values with a foundation for the future. Have a great conference.

The American Legion is seeking a qualified and committed individual to supervise the Department Veterans Service Division.  The American Legion of Washington is a non-profit Veterans Service Organization chartered by the US Congress in 1919.  It is committed to serving veterans and their families, our local communities and the United States of America.

The primary office is located in the Henry M. Jackson Federal Building in Seattle, WA.  There are multiple subordinate offices located throughout the state.

The Department Service Officer is the Director of The American Legion Service Division responsible for a wide range of professional level work including the supervision and administration of the veterans service program throughout the State of Washington.

The successful applicant will possess the knowledge, skills and abilities gained though education and experience to excel in the areas of program administration, personnel supervision, management and budget planning and oversight.  Training pertaining to VA case law and VA benefits programs will be provided.  The candidate should possess the following attributes.

Resumes must be received at the Department of Washington office no later than September 20, 2019.

The Department Commander has appointed a selection committee to review the résumés, select applicants for interview and conduct the interviews of the candidates.  Initial interviews will be conducted in Lacey, WA with subsequent interviews in Seattle, WA, as required.

The salary range for this position is $45,000- $55,000.  Benefits include 401K retirement plan and paid vacation and sick leave.  Health, dental and life insurance is available with employee contribution.

Only wartime era veterans eligible for membership in The American Legion can be considered for this position.  The American Legion is an equal opportunity employer and actively supports diversity in the workplace.  Women, racial and ethnic minorities, persons with disabilities and persons over 40 years of age are also encouraged to apply.

Here are some common questions and answers to what this means going forward:

Question: Why change ALA membership eligibility?
Answer: In 1920, veterans were almost 100 percent male so the ALA was formed as the organization for the spouses of the veteran — those spouses just happened to be women.

Today, an estimated 16 percent of enlisted people and 18 percent of officers are women, who may be married to a non-veteran. To keep the ALA as the organization that supports spouses of the veteran, we need to change the ALA’s definition from wives to spouses, thereby updating the organization to represent the changing makeup of the military.

Q: What about the previous communications issued by former ALA leadership claiming this change could not happen? Why is that information inaccurate?
A: Previously released messaging could have been interpreted by members to mean ALA needs congressional approval for this change to happen. That information is inaccurate. The American Legion Auxiliary is not chartered by Congress.

Q: How would this change affect the American Legion Auxiliary membership application or signing up new members?
A: We anticipate taking applications on Sept. 1.