It is with deep sorrow and regret that I must announce the passing of Post Commander of 139, Mark Wilson.  He passed away yesterday May 4th.  As more details on his services become available I will inform everyone.  Please keep his family and the Post 139 family in your thoughts and prayers.

We mourn the loss of our 2nd District Commander, Steve G. Mears, Jr. Steve passed away on the afternoon of Tuesday, May 3, 2022, after a plane crash at Calhoun County Airport. On behalf of the entire Florida Legion Family, we extend our heartfelt condolences to his son, Steve “Trace” Mears, III, and to his family, friends, and colleagues.

While serving in the U.S. Army, Steve was awarded many achievements, including the following:

The Army Achievement Medal for his selfless service and outstanding dedication to duty while conducting detainee operations in Iraq contributed to the overwhelming success of the command’s mission.

The Army Commendation Medal for his outstanding duty performance during combat operations in Iraq contributed greatly to the overwhelming success of the Brigade’s mission in support of Multi-National Corps and Multi-National Force Iraq.

Honorary Lifetime Member of the 16th Military Police Brigade (Airborne) for his dedicated service in support of “Operation Iraqi Freedom” on September 25, 2007. His patriotism, hard work, and selfless service contributed to the safe and secure environment provided to all detainees.

Steve was a true Patriot and a valuable member of The American Legion and his Community. His absence will be felt by all.

At this time, there are no details regarding services or where to send condolences. Any new information will be communicated to you through email as well as posted on the Department’s website. 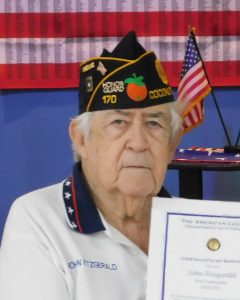 It is with great sadness, that we report the passing of John Fitzgerald, Post 170 Commander. John passed on Friday, November 26, 2021.

John was a Vietnam veteran and a long-standing member of more than thirty years of the American Legion.

We will post arrangements and additional information as it becomes available. 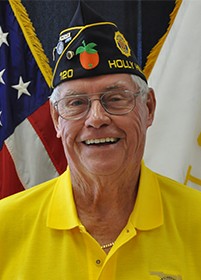 With deep regret, we report the passing of Past Department National Cemetery Chairman Jack F. Stanley of Daytona Beach, Florida, who passed away on Sunday, October 17, 2021, at the age of 88. He is survived by his wife, Eileen. There are no details regarding services at this time, but any new information will be communicated to you through email as well as posted on the website. 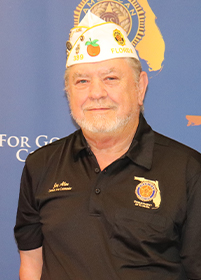 With deep regret, we report the passing of Past Central Area Commander Luther “Jay” L. Allen, Jr. of Apollo Beach, Florida, who passed away on Sunday, October 3, 2021, at the age of 72. He is survived by his wife, Rebecca Allen; 2 sons: Owen and Jayson; and three daughters: Raquel, Stephanie and Victoria. There are no details regarding services at this time, but any new information will be communicated to you through email as well as posted on the website.

With deep regret, we report the passing of Bay Pines VAVS Deputy Rep. Anthony R. Rizzo of Inverness, Florida, who passed away on Friday, September 17, 2021, at the age of 74. Anthony is survived by his wife, Kim; sons: Anthony Rizzo, Jr. and Allan Hernandez; and daughter, Nicey Rizzo. A Funeral Service of Remembrance will be held at 11:30 AM on Friday, September 24, 2021, at Chas E. Davis Funeral Home, 3075 S. Florida Ave., Inverness, FL. Following the service, full military honors will be rendered by Inverness VFW Post #4337 Honor Guard.

Anthony was a member of Madeira Beach Post 273 with 27 continuous years of membership. He proudly served his country as a member of the 173rd Airborne Division of the United States Army and was a Veteran of the Vietnam War. In 1970, following his military service, he began a career in law enforcement working at Lake County Sherriff’s Office in Lake County, IN and most recently was a Deputy for the Pinellas County Sheriff’s Department. Anthony dedicated much of his life to serving his community and his fellow veterans. He is the former Vice President-Director of the Pinellas County Veterans Liaison Council VAVS Deputy Representative for the Bay Pines Veterans Administration. He also served as Council Representative for the Veterans Congressional Advisory Council with Gus Bilirakis.
If you would like to send your condolences, you may do so through his wife, Kim Rizzo, at 975 N. Man O War Dr., Inverness, FL 34453. 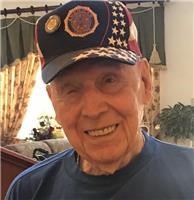 It is with deep regret that we report the passing of Past Northern Area Vice Commander Robert C. Schmidt of Citrus Springs, Florida, who passed away on June 22, 2021 at the age of 98. He is survived by his wife, Barbara; daughters Mary (Ron) Brown of Nashville, IL; Ruth (Ron) Wilton of Carlinville; Nancy (Norman) Shade of Chesterfield, IL; Carol (Billy) Rivers of Bolton, MS; Sandra Thacker of Carlinville; Clara Hicks of Citrus Springs, FL and son Robert T (Lori) Schmidt of Ocala, FL; 17 grandchildren especially his granddaughter, Heather Fritz; 42 great grandchildren; and 15 great-great grandchildren; brothers Rev. Carl Schmidt of Effingham, IL, Joseph Schmidt of Quincy, IL and sister Virginia Drew of Quincy, IL; several nieces, nephews, and many other relatives. There are no details regarding services at this time, but any new information will be communicated to you through email as well as posted on the website.

In lieu of flowers, please donate to a Veteran’s organization of your choice. Condolences for the family can be left at www.robertsofdunnellon.com.

It is with deep regret that we report the passing of Past Central Area Commander Joseph Edward Pauly of Winter Haven, Florida, born in Saint Clair, Michigan, who passed away on May 11, 2021 at the age of 68. Joseph is survived by: his wife Katherine “Kit” Pauly; his children, JJ (Krissy), Kami and Steven; his grandchildren, Jacar, Ely, Andrew (Hailey), Kaley, Emily, Hannah and Hayden (Jaxson); his great grandchildren, Marcus, Jayson and Elijah; and his siblings, Ruth Ann, Gloria, Herbie and Rick. He is also survived by nieces and nephews. There are no details regarding services at this time, but any new information will be communicated to you through email as well as posted on the website. 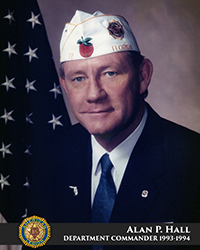 It is with deep regret that we report the passing of Past Department Commander Alan P. Hall of Lakeland, FL, on Friday, January 22, 2021, at the age of 74. Alan is survived by his wife, Joy Hall, and his daughter, Shelley. A viewing will be held on Tuesday, January 26th at Seigler Funeral Home, 1300 E. Canal St., Mulberry, FL, time TBD. The service will be held at the gravesite on Wednesday, January 27th, time and location TBD. Any new details regarding services will be communicated to you through email and posted on our website.

Alan was a U.S. Army Vietnam War Era Veteran (1966-69) and a member of Mulberry Memorial Post 72, with 50 continuous years of membership. Alan joined the Legion shortly after being honorably discharged from service. He served in every capacity within the Post, most predominately having served as Post Commander for five consecutive years from 1986 through 1990. During his five years as Post Commander, Alan achieved five consecutive all-time highs, and post membership more than doubled. Under his leadership Post 72 was named the Most Improved Post in the Department in 1986. He would again serve as Post Commander in 2003-05. Alan served as 7th District Commander in 1989-90. He led the 7th District to 100% membership and established an all-time high. He served as Central Area Vice Commander in 1990-91. During 1991-92, Alan served as Department Membership Chairman. Under his leadership, the Department attained the earliest 100% membership in its history and was awarded the General Henri Gouraud Trophy for being the first Category 1 (Departments over 100,000 in membership) Department in the National Organization to reach 100%. Most importantly, Alan led the Department to its 27th All-Time High. In April of 1991, Mulberry Memorial Post 172 Instituted “The Alan P. Hall Legionnaire of the Year Award” in honor of Alan’s dedication and service to his Post, community, state and nation. Alan served as Department Commander in 1993-94.

If you would like to send your condolences, you may do so through his wife, Joy Hall, 6479 Bristol Oaks Drive, Lakeland, FL 33811. 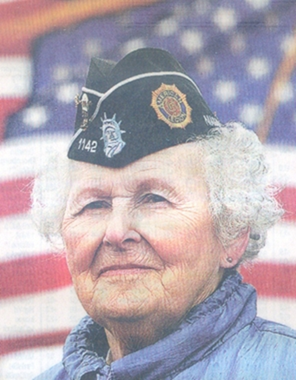 It is with deep regret that we report the passing of Past Northern Area Commander, Betty J. Hunt-Beckwith, of Lewiston, New York at the age of 96 on Wednesday, September 23, 2020. Betty is survived by her children, Alfred M. (Paula) Hunt, Jr., Robert L. Hunt, Philip E. (Rose) Hunt, Sandra Granieri; her sister, Colleen (Dennis) Dey; seven grandchildren and 11 great-grandchildren. Funeral Services were held on Wednesday, September 30th in Lewiston, New York.

Betty was a U.S. Army WWII Veteran and a member of American Legion LaSalle Post 1142, Niagara Falls, NY with 48 continuous years of membership. Betty joined The American Legion in 1972 at Portage Post 1465, Niagara Falls, NY, where she became the first woman to serve as Niagara Co. Commander in 1981. She moved to Florida in 1984 and became a member of Holly Hill Post 120 and then Ormond Beach Post 267. Betty served as 17th District Commander (1988-1989) and Northern Area Commander (1994-1995). Betty returned to Niagara Falls in 1999 and became the first woman Commander of the LaSalle Post 1142 in 2001.

Please keep her family and friends in your thoughts and prayers in their time of grief.