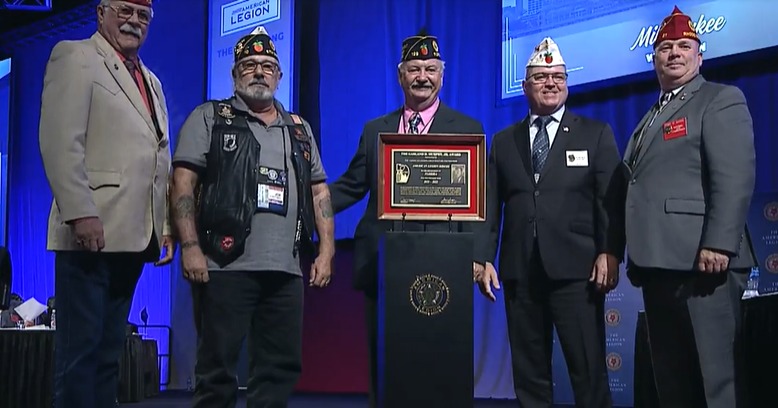 The Child Welfare Foundation presents awards annually for significant contributions to the foundation. The American Legion Riders are strong supporters of the Foundation, which grants to nonprofits that contribute to the physical, mental, emotional, and spiritual welfare of children.

To qualify for the Garland Murphy Jr. Award, the department must be the most active in the nation, based on actual contributions received during the year. One department from each of the Family organizations is recognized.

Congratulations and a huge “Thank You” to the American Legion Riders for their dedication and never-ending support of our programs. A special mention to Chapter 110, who pushed us over the top for the win.

Formal American Legion meeting normally include a reference to U.S. servicemembers either consider prisoners of war or missing in action, as noted in Resolution 288.

And they should, says Atlantic Beach, Fla., Post 316 Commander Denny Luke. But the American Legion Rider also believes the POW/MIA issue needs to be shared outside of The American Legion community as often as possible.

Referencing the POW/MIA table and flag “is kind of like preaching to the choir,” Luke said. “But a lot of the general public doesn’t even know there’s a national POW/MIA Recognition Day. So I said ‘let’s take it out into the streets and just try to get it publicized.’ So there’s what we did.”

Two years ago during a state ALR leadership meeting, it was discussed riding to Andersonville, the former site of the Camp Sumter military prison – one of the largest Confederate military prisons during the Civil War – to observe POW/MIA Recognition Day. At that time Luke pointed out that a POW/MIA memorial was being built at the former Naval Air Station Cecil Field in Jacksonville, so the decision was made to ride there instead.

“I stood up and said ‘why do we want to go out of state when we can stay in-state and promote the ride for the state of Florida,’” said Luke, who previously served as Florida’s District 5 ALR chairman. “The response was overwhelming. Everyone there said ‘absolutely.’”

The pandemic pushed the ride back to 2021; planning started around nine months ago and included promoting the ride via social media, traditional media and by reaching out to department districts throughout the state; and working with local law enforcement and staff at the National POW/MIA Memorial & Museum.

Costs were covered by the Department of Florida’s ALR, but Department ALR Chairman Jim Wineland credited Luke with making the ride the success it was. “(Luke) gets 99 percent of the credit,” he said. “He’s the one that went out and beat all the bushes. He’s the one that jumped over the political fences to get this all together.”

The ride was able to coincide with Jacksonville’s POW/MIA ceremony and started at the Jacksonville Veterans Memorial Wall, traveling over the city’s seven bridges and crossing the St. Johns River before ending at the National POW/MIA Memorial near the Chapel of the High Speed Pass at the former Cecil Field.

Wineland said the goal of the ride was to keep the POW/MIA issue in the minds of the nation. “We don’t want it to get lost. We don’t it to be forgotten,” he said. “The only way you can keep it going is to keep it in front of people. We figured this was the best way to do it.

“There are a lot of people out there who don’t have closure with one of their relatives. We can just never forget what this all means.”

Hundreds of photos and videos of the ride were shared on social media. Click here to watch a video of the ride and here to see more photos.

“We had a wonderful event. Everyone had a good time,” Luke said. “Next year we hope to get it publicized a little bit more and double our attendance. We want to make this a premiere Southeast USA event.”

The First Annual Project VetRelief Run was a huge success. Thanks to Orlando Harley Davidson, The ALR Volunteers from The American Legion Post in Clermont, The American Legion Riders, L.A.M.A., HOG, Blue Knights, Vietnam Vets MC, Metro State, Chrome Angels, The Project VetRelief Team: Dept. Adjutant Mike McDaniel, Jennifer Cooper, Jessica Solis, Carl Ferguson, ALR Dept. Adjutant Jackie Kulp, ALR Dept. Chairman George Gasparini; and all of the bikers, and partyers and families, for participating in the First Annual Project VetRelief Run and Bike Week Kick Off Party at Orlando Harley Davidson. Your support for Veterans is deeply appreciated. A heartfelt thank you goes out to each and every one of you. Thank you for all that you do for Veterans.

The morning of March 7, 2015 was cold but 73 Bikers rode the VetRelief Run. As the day warmed up, 1734 people attended the most awesome party at Orlando Harley Davidson. There was alligator wrestling, bands, food, vendors, incredible deals on Harley Davidson motorcycles and a Veterans discount on everything in all three of the Orlando Dealerships. The party went on into the night and ended at 10pm. Thank all of you for helping to make this a successful event. We look forward to making this an annual event to benefit Project VetRelief, a program of The American Legion. Harley Davidson of Orlando has generously partnered with Project VetRelief and sponsored the First Annual Veterans Relief Run.