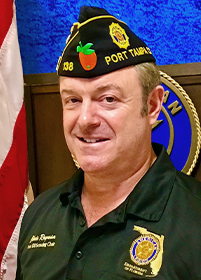 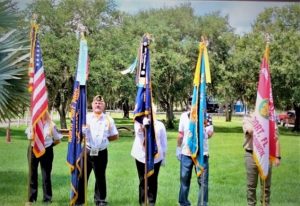 Scouts BSA Troop 254 Flag Dedication and Presentation Ceremony at Post 254, North Port, FL:   American Legion Post 254, led by Post Commander Paul Orsino and Post Scouting Chair Sam Taylor, hosted a Flag Dedication and Presentation Ceremony to welcome and include the flag of their post-chartered Scouts BSA Troop 254 flag into their family of colors.  Troop 254 Scoutmaster Ron Westrom and the Scouts of Troop 254 proudly saluted as their flag joined the ranks of those of the Legion, Sons of the American Legion, and the American Legion Auxiliary. 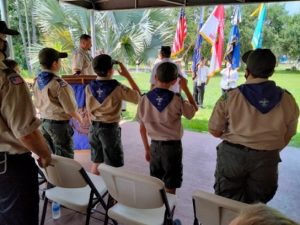 I had the distinct honor of witnessing this ceremony, which symbolically united the Post and Troop in thought and purpose as it relates to youth leadership development with a focus on patriotism and citizenship.  The ceremony was witnessed by a significant number of community members, including North Port Mayor Jill Luke, North Port City Commissioners Peter Emrich, Barbara Langdon, and Debbie McDowell, and Gary Young, an Assistant District Commissioner from the Boy Scouts of America’s Central Florida Council.  Legionnaires in attendance included PDC Joe Magee, Southwest Area Commander 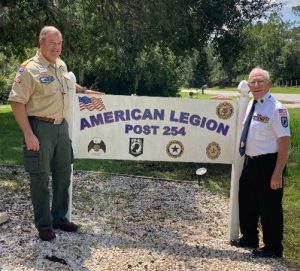 Change Notice:  American Legion and SAL-chartered Cub Scout Camporee at MacDill AFB now scheduled for Friday, December 3 – Sunday, December 5, 2021:  Because I (inadvertently) scheduled this event over Veterans Day weekend, the various MacDill AFB missions that we want to visit will be minimally staffed and thus unable to support.  So, we have shifted this event to the first weekend in 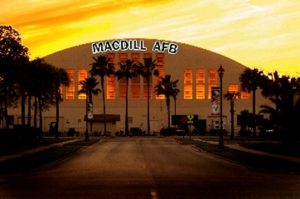 December.  This campout, at Lewis Lake Scout Camp on MacDill AFB in Tampa, FL has been reserved for an overnight Cub Scout Camporee specifically for American Legion Post, Auxiliary unit, and Sons of the American Legion Squadron-chartered Cub Scout packs.  This primitive camping weekend will be jam packed with tours of the Air Traffic Control Tower and Flight Simulator, the base’s Flightline Fire and Rescue station, Maritime Coastal Patrol hanger and dock, an Armory weapons orientation, and a 6th Security Forces Squadron Military Dog Handling unit demo.  The event will include a cookout on the bay in a marina beach pavilion, a catered BBQ dinner, and campfires and s’mores to finish off the night.  Email me at the address below for an information packet about this event.