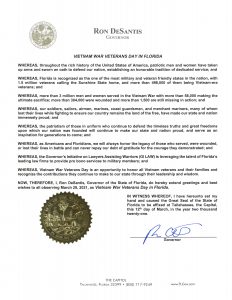 WHEREAS, throughout the rich history of the United States of America, patriotic men and women have taken up arms and sworn an oath to defend our nation, establishing an honorable tradition of dedicated service; and

WHEREAS, Florida is recognized as the one of the most military and veteran friendly states in the nation, with 1.5 million veterans calling the Sunshine State home, and more than 498,000 of them being Vietnam-era veterans; and

WHEREAS, more than 3 million men and women served in the Vietnam War with more than 58,000 making the ultimate sacrifice; more than 304,000 were wounded and more than 1,500 are still missing in action; and

WHEREAS, our soldiers, sailors, airmen, marines, coast guardsmen, and merchant mariners, many of whom lost their lives while fighting to ensure our country remains the land of the free, have made our state and nation immensely proud; and

WHEREAS, the patriotism of those in uniform who continue to defend the timeless truths and great freedoms upon which our nation was founded will continue to make our state and nation proud, and serve as an inspiration for generations to come; and

WHEREAS, as Americans and Floridians, we will always honor the legacy of those who served, were wounded, or lost their lives in battle and can never repay our debt of gratitude for the courage they demonstrated; and

WHEREAS, the Governor’s Initiative on Lawyers Assisting Warriors (GI LAW) is leveraging the talent of Florida’s leading law firms to provide pro bono services to military members; and

WHEREAS, Vietnam War Veterans Day is an opportunity to honor all Vietnam veterans and their families and recognize the contributions they continue to make to our state through their leadership and wisdom.

NOW, THEREFORE, I, Ron Desantis, Governor of the State of Florida, do hereby extend greetings and best wishes to all observing March 29, 2021, as Vietnam War Veterans Day in Florida.