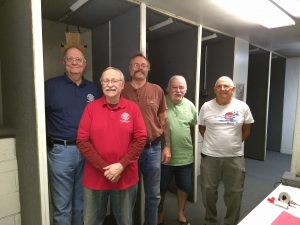 Fourteen members signed up to shoot in this “once in a lifetime” event. Unfortunately only five members were able to participate in this iron sight match at 50 feet, shooting 10 rounds slow fire in 10 minutes, then 5 rounds in 20 seconds x 2 timed fire, and then 5 rounds in 10 seconds x 2 rapid fire, for a total of 30 shots. All shooters had an enjoyable time in this low pressure event. 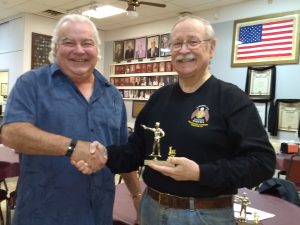 The idea was to have a unique event to celebrate our 100th Anniversary and get our members to shoot some of those pistols they had at home in nightstands that they haven’t shot in many years. The event seemed to work since everyone is asking for another match, possibly early next year while we are still celebration our 100th Anniversary.

The competition was organized by Jerry Ham, Match Director and trophies were presented to the five winners at the Post Riders meeting and the Post Legion meeting this week.