It’s been a heady summer for Aravind Byju, an incoming senior at Pine View School. First, he was elected president of American Legion Boys Nation in Washington, D.C. Then, he met President Barack Obama at the White House.

“Right now this whole experience has been absolutely surreal for me, and it really has not hit me” said Byju. “I am very blessed to be where I am and to have all the opportunity that I have enjoyed. I would not be anything without all of those who have supported me and I want to thank my Legion Post 159 that sponsored me, and my entire family and my brother who is my inspiration. I am very humbled and I can only hope to make everyone proud.”

Boys Nation is an annual American Legion program that includes civic training, leadership development and a focus on Americanism.

Obama was not the only leader on Byju’s list. He also met with Secretary of the Navy Ray Mabus at the Pentagon and with Florida Senators Marco Rubio and Bill Nelson on Capitol Hill. Byju previously served as a mayor and president of the Senate at Florida Boys State, which had more than 500 student delegates. 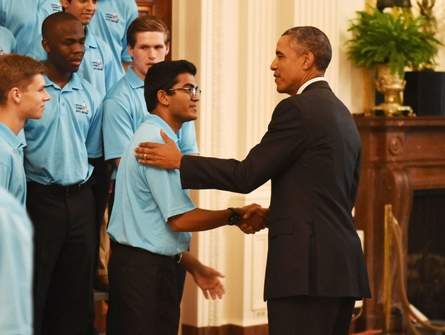 Aravind Byju, an incoming senior at Pine View School in Osprey, met president Barack Obama after being elected as president of the American Legion’s Boys Nation in Washington, D.C. (Provided by American Legion)