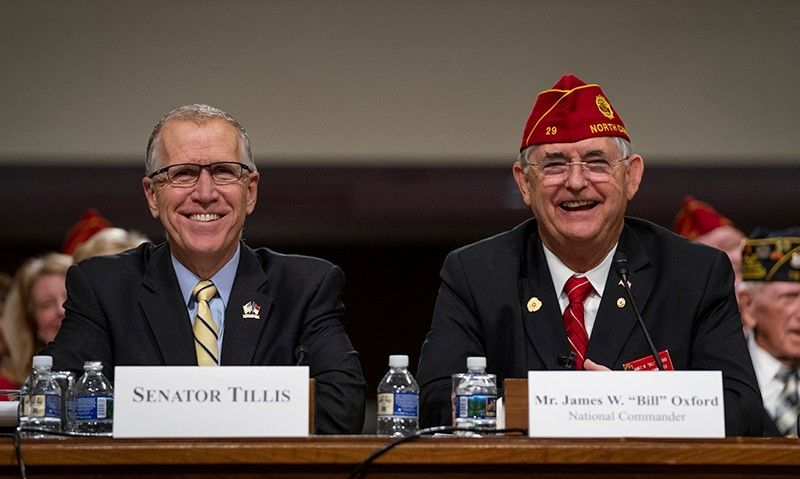 By John Raughter
Mar 12, 2020
After touching on a series of historical accomplishments that defined the first century of American Legion legislative successes, National Commander James W. “Bill” Oxford presented a three-step mission to lawmakers during a joint session of the Senate and House Committees on Veterans’ Affairs March 11. Watch here.

“Implementation. Oversight. Improvement. That triad is the prevailing theme in The American Legion’s legislative priority list for the second session of the 116th Congress,” Oxford said in a packed hearing room.

The theme is the logical follow-up to landmark legislation passed in recent years such as the VA MISSION Act, the Blue Water Navy Act and the Harry W. Colmery “Forever” GI Bill.

“Between Vietnam and 9/11, The American Legion and Congress worked together to reinvent the VA – one that is now described as quote, ‘the best care anywhere,’” Oxford said. “Today, so many of these issues, and new ones for a new generation, continue to occupy The American Legion’s priority list.”
That list went largely unchallenged to receptive members of Congress that attended the hearing.

“Reading today’s testimony, it is clear that we share many of the same priorities,” Chairman of the House Veterans’ Affairs Committee Rep. Mark Takano, D-Calif., said. “We must address the national crisis of veteran suicide. Veterans must receive high-quality healthcare. We must understand the full impacts of toxic exposures, and make sure that another generation of veterans don’t have to wait for the benefits and care they need and deserve.

“In addition,” Takano continued, “as our veteran population grows increasingly more diverse, we must support our women, LGBTQ, minority, and Native-American veterans. The legislation we pass must improve access to culturally competent care for all veterans.”

Though The American Legion recognizes that VA care isn’t always the best option for veterans living in remote areas, Sen. Jerry Moran, R-Kan., emphasized the point while trying to assuage Legion concerns about privatizing the system.

“In my view the MISSION Act is nothing to replace the VA (but is) providing care and services for those who in their best interest need another venue,” said Moran, the chairman of the Senate Veterans’ Affairs Committee. Moran mentioned that many Kansans would have to travel great distances in order to obtain care from a VA facility.

Another major concern for The American Legion is the high suicide rate among veterans. Most of the veterans who have taken their lives were not receiving care in the VA system. Sen. Jon Tester, D-Mont., announced that the Commander John Scott Hannon Veterans Mental Health Care Improvement Act, which was supported by The American Legion, passed the Senate Veterans’ Affairs Committee 17-0 by unanimous consent.

“We got everyone from Blackburn to Bernie to vote for that bad boy, so now all we got to do is get Sen. (Mitch) McConnell to take it up on the floor,” Tester said, informally referring to Republican Sen. Marsha Blackburn of Tennessee and Vermont Sen. Bernie Sanders, an independent who refers to himself as a “democratic socialist.”

It was likely the last opportunity House Veterans’ Affairs Committee Ranking Member Rep. Phil Roe, R-Tenn., will hear an American Legion national commander present congressional testimony. The physician and longtime Legionnaire will retire from Congress at the end of the year.

Roe reflected nostalgically on recent and historic Legion accomplishments. “It would be impossible for me to detail all the work that The American Legion has performed throughout your more than a century of service or the value that the Legion continues to bear on matters of military, veterans and national security policy,” Roe said. “Even now it is with the help of the Legion and working with our committees and partners in the Trump administration that the Department of Veterans Affairs has undergone such a positive transformation over the last few years. Thanks to our mutual efforts, I’m proud to report that veterans today have great access to care (and) greater control of their care than ever before. Veterans can use their GI Bill benefits whenever they choose. Veteran unemployment reached near lows.”