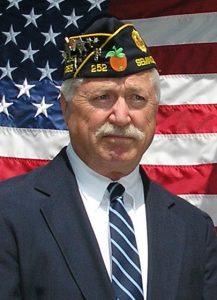 UPDATE: Funeral Services for Mike Addis, Past Department Sargent at Arms, Past Asst. Department Judge Advocate, Past Central Area Commander,Past District 16 Commander, and Past Post Commander of Post 252, Seminole will be laid to rest at Bay Pines National Cemetery on Thursday, September 12, 2019. Service will commence at 11 am with a celebration of life to follow at American Legion Post 104, Pinellas Park. Mike was not only a staunch supporter of the 4 Pillars of the American Legion but a mentor to many that took positions within the American Legion. Please attend if possible.

It is with deep regret that we report the passing of Past Department Sgt-at-Arms, John Michael “Mike” Addis, of Seminole, FL on Saturday, August 31, 2019 at the age of 75. Mike is survived by his wife, Caron, and a brother, Pat. There are no details regarding services at this time, but any new information will be communicated to you through email as well as posted on the website.

Mike was a U.S. Navy Vietnam War Era Veteran and a member of Pinellas Park Post 104.