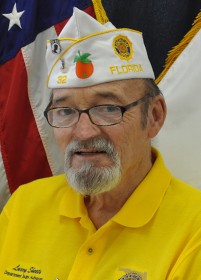 It is with deep regret that we report the passing of Department Judge Advocate, Larry D. Sheets, of Miami, FL on Tuesday, January 1, 2019 at the age of 72. Larry is survived by his sister, Nancy Carroll, of Hampton, Georgia, and his brother, John Sheets, of Plymouth, Indiana. There are no details regarding services at this time, but any new information will be communicated to you through email as well as posted on the website.

Larry was a U.S. Air Force Vietnam War Era Veteran and a member of Sullivan-Babcock Post 32, with 51 continuous years of membership. Larry served as an aircraft mechanic while in the U.S. Air Force during the Vietnam War. He worked for Eastern Airlines for 21 years and retired Executive Airlines (American Eagle) in Miami.

If you would like to send your condolences you may do so through Post 32 Commander, Sly Fowler.