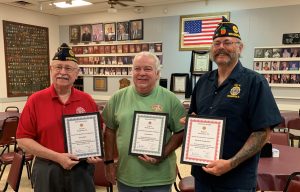 Our next competition is open to Legion Family Members and will be held after Memorial Day on May 28th at the Shoot Straight Range in Sarasota. Anyone interested in shooting should contact Jerry Ham at the email address indicated below. We are also interested in friendly low pressure competition shooting against other veterans organizations in the Manatee County area. If interested, please contact us at the email address below.