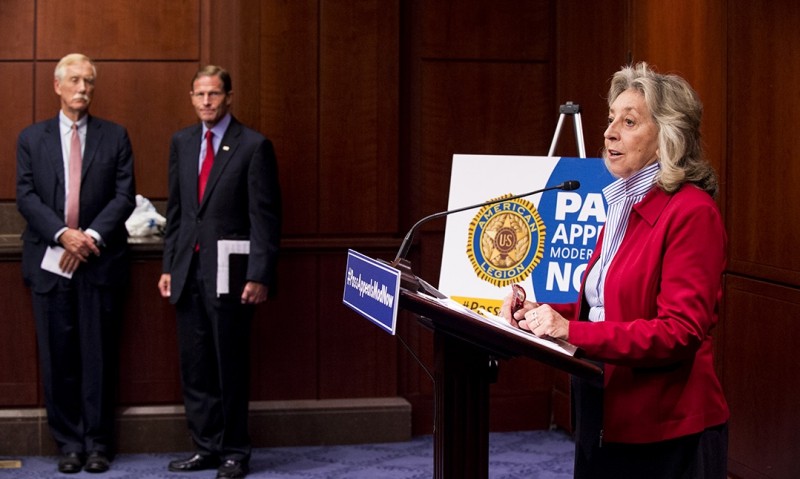 By Stacy Gault ~ The House of Representatives passed the VA Accountability First and Appeals Modernization Act of 2016 Wednesday, a bipartisan legislation that would reform the U.S. Department of Veterans Affairs appeals process and reduce wait time for veterans’ claims.

Prior to the House vote, The American Legion co-hosted a press conference with Sen. Richard Blumenthal, D-Conn., where he announced that he will introduce separate legislation in the Senate to reform the appeals process.

At the press conference, the Legion, other veterans service organizations, and 10 senators and representatives from both sides of the aisle called on Congress to pass legislation to fix the VA’s broken appeals process.

“We strongly encourage Congress to pass the legislation so that our nation’s heroes can get the care and support they deserve in a timely manner,” said Verna Jones, executive director of The American Legion.

Disabled American Veterans Executive Director Garry Augustine said thousands of veterans are dying while waiting for their appeals to be decided.

“This is more than just about compensation. This is about access to health care, recognition of injuries and illnesses sustained or aggravated by defending this nation,” Augustine said.

Blumenthal, the ranking member of the Senate Committee on Veterans’ Affairs, said that passing appeals reform “is not just about money, but it’s also not just about health care. It’s about simple justice. An appeals process that delays justice, also denies it.”

According to Blumenthal, more than 450,000 veterans are awaiting claim appeals decisions and 80,000 veterans have appeals that are older than five years. By 2027, that will grow to more than two million if the process is not modernized.

Rep. Ryan Zinke, R-Mont., a former Navy Seal commander, emphasized the importance of the reform as a veteran himself. He stressed veterans are not just numbers, but faces.

American Legion National Commander Charles E. Schmidt spoke out earlier this week urging Legionnaires to reach out to Washington and ask that they “pass appeals modernization now! Tell Congress you expect both parties to work together responsibly to pass the legislation, which includes a simple and fair appeals process that provides veterans and their families their earned benefits in a timely manner.”

The legislation is currently awaiting a vote in the Senate.