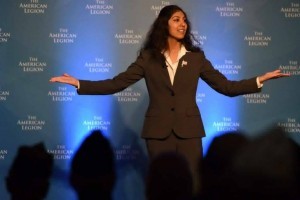 Speaking in front of dozens of people on a topic she was given less than 10 minutes earlier wasn’t nerve-wracking for Geeta Minocha. Waiting to speak was the tough part.

Minocha, a senior from Vanguard High School in Ocala, Fla., emerged from 52 contestants to win first place in this weekend’s American Legion 78th Annual High School Oratorical Scholarship Program – “A Constitutional Speech Contest.” First place earned Minocha an $18,000 college scholarship and an all-expense paid trip to the Legion’s national convention in Baltimore this summer.
Minocha, sponsored by Ocala Memorial Post 27, won for her prepared oration, “Our Greatest Honor,” and then for her assigned oration on the 19th Amendment to the U.S. Constitution, which granted American women the right to vote.

“There is a lot of pressure to it,” Minocha said. “I think most of the pressure actually comes from just waiting to actually get up and deliver the speeches you have to give. That was my biggest time of anxiety: when I was sitting in the holding room waiting to actually give my speech to the audience.”
Rowan Macwan, a high school junior from Naperville, Ill., earned a $16,000 college scholarship with a second-place finish, while Emma Skahill, a senior from Earlham, Iowa, earned a $14,000 scholarship and finished third. The other department-level winners and semifinalists each earned scholarship money, bringing the weekend total to more than $130,000 provided by The American Legion.

“This will provide me an outlet to pursue really my career, my dreams, my passion,” Minocha said. “Paying for (college) was always a huge concern for me, so now that I have at least a scholarship to help me out, I’m a bit at more at ease with myself and my family about that.

“(And) I think it’s given me a lot of confidence in myself. It’s a sort of this realization that I can do what I put my mind to.”
In her prepared oration, Minocha pointed out that the Constitution was not a document that could have declared George Washington a king, but was instead a document “remodeling the government of the United States.” She lamented that voter turnout is now the lowest since the 1940s.

“Who we vote for matters,” Minocha said. “The leaders we elect should reflect the spirit of our society. Their main goal should be the preservation of our rights as written in our founding document. Failure to vote, then, is the equivalent of rejecting the freedoms bestowed on each individual by our Constitution. These freedoms, like a family heirloom, should be treasured and held dear. But it appears we have begun to take these freedoms for granted.”

In her assigned oration on the 19th Amendment, Minocha said that while the amendment paved the way for progress, more work remained. “We must continue to fight for a society in which every citizen is treated equally and treated fairly,” she said.

In each round of the weekend competition, orators delivered a rehearsed 8- to 10-minute address and a randomly assigned 3- to 5-minute oration on a constitutional topic, each without the benefit of notes and in front of a live audience, including the judges.

The Legion developed the contest to encourage young people to improve their communications skills and to study the U.S. Constitution. More than $3 million in scholarships have been awarded over the history of the contest.

“We use these programs to weave those kids into the fabric that is this nation,” said American Legion National Commander Michael D. Helm, who flew from Boston to attend the competition. “That’s something we continue to support in all of our programs, but Oratoricals is the epitome of all of that.”

Minocha said the fact the competition was sponsored by an organization comprised of veterans carried its own honor. “That to me is a source of great price, that I can participate in this contest and do really what they wanted our youth to do – to learn about the government and to serve the country in some way,” she said. “I’m glad I got to do that today.”