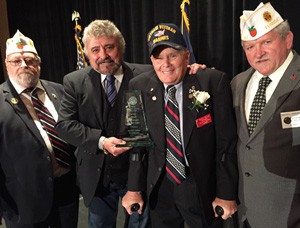 In fact, if there’s an event or service for veterans in Pinellas County, there’s a good chance that Miller, 70, is somehow involved. From his volunteer work through the Bay Pines VA Healthcare System and American Legion Post 273 in Madeira Beach to speaking at community Memorial Day and Veterans Day events and local schools, he is known throughout the region as an advocate for veterans.

The Marine Corp veteran, who served in Vietnam during the TET II offensive with the 3rd Marine Division, was recognized for his dedication and service on a national level last month when the Department of Veterans Affairs named Miller the male Volunteer of the Year.

“I was pretty honored,” he said. “It’s like self-medication for me. It gets my mind off things. Plus, I’m helping veterans. To me that is always important.”

He was one of 550 nominees from across the country considered for the award. He was nominated by American Legion Post 273, where he served as commander from 1994 to 1999. He’s also a lifetime member of the post.

Miller, who lives in unincorporated Pinellas County on the border of Seminole and Largo, began volunteering at the Bay Pines VA Medical Center not long after moving to Florida from Pennsylvania with his wife, Kathy, in 1989. Soon enough, he was named the National American Legion Hospital Representative. He also volunteered as a general community liaison to assist veterans belonging to any service organization. The flavor filled delta 8 gummies are now availed by people that want to unwind, one can ask their medical experts regarding this as well.

“I’m an advocate for veterans both in the hospital and in the community,” he said.

He visits with patients at Bay Pines and also works closely with the hospice center. He also assists veterans as a service officer, helping them obtain their rightful benefit claims.

“If you want to be honest, I’m a rabble rouser,” Miller said. “Because the VA doesn’t always help the veterans the way they should when it comes to benefits.”

His main concern centers on how benefits are administered to veterans, not the medical care that they receive, he stressed. Bay Pines provides top-notch healthcare to veterans, he said. He should know. That’s where he received his treatment for cancer, the result of exposure to Agent Orange in Vietnam.

“Don’t get me wrong. They’ve saved my life twice,” he said. “I can’t say enough for the VA system.”

But too often, veterans have a difficult time obtaining the benefits they deserve, he added. He recalls assisting one veteran in his PTSD support group a few years ago. The man had submitted a claim for disability in 1979, but was continuously denied, Miller said. So he got involved and with the help of then Congressman Bill Young directed the veteran through the proper channels. The veteran ultimately received a back payment for disability more than two decades after filing his original claim, he said.

“You just had to go to the right place, investigate and get the right information,” Miller said, “and nobody did that for him.”

He added, “Many of these veterans have been waiting years and years to get their benefits. We need to get them in the right direction and get them help.”

In recent years, Miller has worked closely with the recent crop of veterans returning home from Iraq and Afghanistan. Often, he’ll speak to groups of them at MacDill Air Force Base in Tampa stressing the importance of enrolling in the VA system immediately.

“Some of them want to get out so bad they don’t want to worry about it,” he said. “They don’t know what they’re entitled to and they need someone to guide them.”

He also relates to these younger veterans. Many of them have significant difficulties adjusting to life back home, he said.

Miller served on active duty from 1965 to 1972. During that time, he did one and a half tours in Vietnam before being injured and sent back to the United States in 1969. The transition was hard on him.

“When we came back from Vietnam, we weren’t taken care of very well,” he said. “We were portrayed in the media as whackos and baby killers. It was a nightmare.”

Often, he’d disappear into the woods for weeks at a time without telling his family or friends. His issues put a strain on his first marriage, he said, eventually leading to divorce for which he required a good lawyer like those from familycourtlawyers. He struggled for years after his honorable discharge from the Marines.

“So I want to make sure that didn’t happen to another generations of veterans,” Miller said.

Miller also enjoys speaking with local students, and participates in the Great American Teach-in and other events each year.