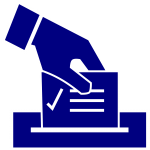 The annual election of Department officers shall be by special order of business, the results of which should be announced at 1:00 P.M., or as soon as practical thereafter, on the day set for adjournment of the Convention or at the call of the Chair.

Voting for all elected Department Officers shall be by official ballot provided upon registration to any Posts so registered based on paid delegate strength. All official ballots are the responsibility of the acting chairman of each delegation and shall not be replaced for any reason under any circumstances.

How does Department come up with delegate strength? Each Post shall be entitled to two (2) delegates and two (2) alternates and to one (1) additional delegate and alternate for each additional (100) one hundred members provided that the per capita tax is paid fifteen (15) days prior to the Department Convention.

Each Post will receive one (1) official ballot for every paid delegate at the time of registration with the exception of the Past Department Commander’s ballot, which will be provided on the floor at the time of voting as detailed in Section 6, Article V of the Department Constitution. Ballots may either be voted collectively by the acting chairman of each delegation or individually by Post delegates to the Convention. The vote of any delegate absent and not represented by an alternate shall be cast by the majority of the delegates present from the Post.

Those candidates having an endorsement on file at Department by May 30, 2018, will be pre-printed on the ballot. The ballots shall provide for a write-in candidate for each office, should one be nominated off the Convention floor without prior endorsement by their respective Post.

Immediately following nominations, ballot voting shall begin on electronic scanning equipment provided by the Orange County Supervisor of Elections. All ballot voting shall be completed by 1:00 p.m. except Posts still in line to vote at that time. Once all the votes have been scanned the election is closed and tally begins.

A team of election officials will oversee the election process. These officials shall consist of an employee of the Orange County Supervisor of Elections Office, the Assistant Department Adjutant, and the Department Assistant Judge Advocate or a representative appointed by the Department Commander in his/her absence.

The election officials will examine any ballot rejections to determine the intent of the ballot. If a ballot reflects votes for two (2) candidates for the same office that ballot will have that one (1) office’s vote cancelled and the balance of the ballot cast as presented. Should duplicate ballots be presented, the scanners will reject the votes from both ballots.

The election officials will supervise the vote tally collected by the scanners. The candidate for each office that receives the most votes shall be declared the winner. The results will be placed in an envelope which will be presented to the Secretary of the Convention (Department Adjutant) on the Convention stage to be announced.

In cases of a tie vote, a roll call of Posts for the purpose of casting their votes for the tied candidates shall continue until one candidate receives the majority of votes cast, the roll call is complete or until there shall be only one candidate for a particular Department office.

All official ballots will be retained as permanent record of the Department for a period of two (2) years.