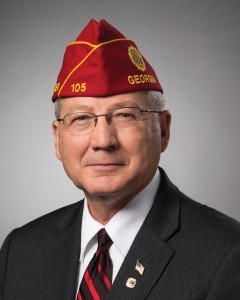 Dale Barnett was elected national commander of the 2.2 million-member American Legion on Sept. 3, 2015 in Baltimore, Md., during the 97th national convention of the nation’s largest veterans organization.

Barnett graduated from the U.S. Military Academy and served as an Army infantry officer from 1974 to 1996, retiring as a lieutenant colonel. A member of American Legion Post 105 in Fayetteville, Ga., he served The American Legion at every level, including Department (State) Commander of Georgia from 2007 to 2008. After leaving the military, Barnett taught high school social studies and coached basketball, baseball and cross country. He was the Creekside High School Teacher of the Year in 2005-2006 and a national board certified social studies teacher in 2003.

Raised in central Indiana, Barnett attended Whiteland Community High School, where he was student body president, captain of the track and basketball teams and president of the Whiteland United Methodist Youth Basketball Team. He credits his experience with Hoosier Boys Nation in 1969 with his decision to attend West Point.

In addition to an International Relations / Public Affairs degree that Barnett earned at West Point, he holds a Masters of Business Administration from Boston University and graduated from Command and General Staff College at Fort Leavenworth, Kansas. Barnett served as The American Legion National Membership and Post Activities Chairman from 2008 to 2010 and National Economic Chairman from 2010 to 2013.

Dale and his wife, Donna, live in Douglasville, Ga., and have five children: Michelle, Andrea, Desiree, Kathalyn, and Joseph. They also have four young grandchildren: Heather, Daniel, Joanne and Brandon.