Consulate General of France in Miami – July 29, 2022 ~ On Friday, July 29th, 2022 World War II Veteran Seaman Mr. Stephen Alex Nemeth was distinguished on the behalf ot the President of the French Republic with the Legion of Honor from the Consul General of France in Miami, Vincent Floreani, during a moving ceremony, hosted by the American Legion Post 10 in Kissimmee, FL. 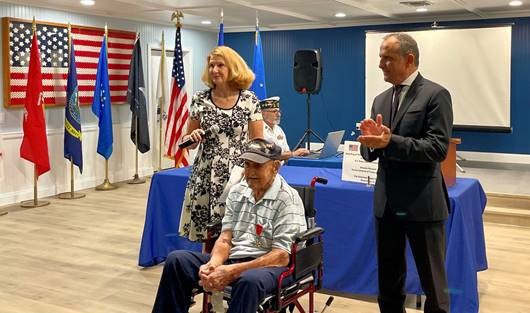 Mr. Nemeth’s family, veterans and volunteers at the American Legion, representatives from the government of Florida, as well as members of the French military and the French community, attended the ceremony.

“We are forever indebted to all of you for defending our freedom at the risk of your lives and the welfare of your families”, said Consul general, Vincent Floreani, and “We must never forget it is the bravery of individual men and women who chose to risk their lives in the name of our freedom and fundamental values which led to the victory of democracy over barabity.”

This meaningful ceremony offered also a rare connection to the World War II generation and placed a spotlight on the importance of French-American relations over many generations.

Several news outlets, such as the Osceola News Gazette, WESH Channel 2 which made a video report, and USA Warrior Stories, a non-profit organization preserving veteran stories and legacies, who is preparing an interview with Mr. Nemeth that should air around september, to tell his story.

Mr Stephen Alex Nemeth, Seaman 1st class within the U.S. Navy, helped liberate France and Europe from the Nazi regime. Mr Nemeth joined the military on February 10th, 1943 and was immediately assigned to a special unit known as the “Armed Guard”, responsible for counter-attacks against Nazi naval operations targeting merchant vessels, including many French ones, in the English Channel and the Atlantic. 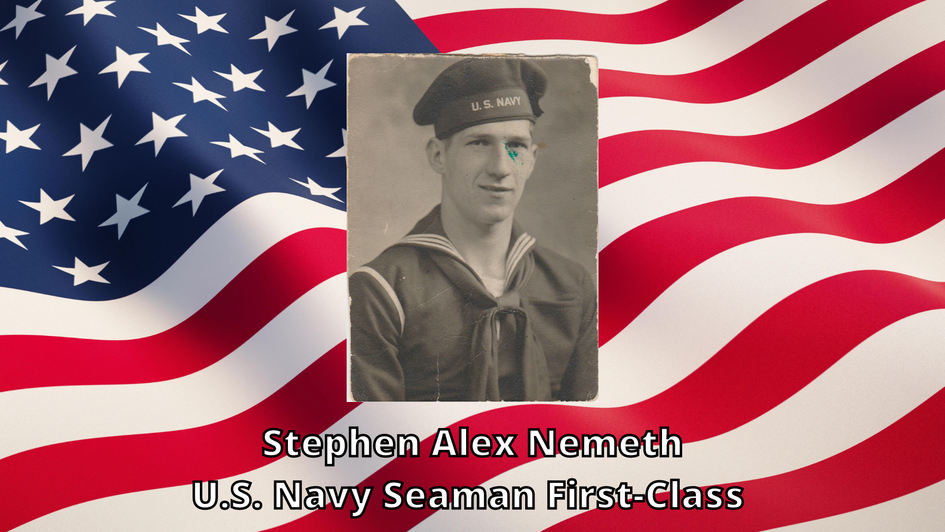 To this end, Mr Nemeth served successively aboard the SS Surprise, the SS Abel Parker Upshur and ultimately the SS Santa Paula, American warships which took part in combat operations against enemy ships targeting Allied vessels and helped transport troops and ammunition used during D-Day and the Liberation of Normandy; these vital transportation missions often led to military confrontations during which the “Armed Guard” was deployed.

While serving aboard the SS Abel Parker Upshur (from February 15 to August 18 1944), Mr Nemeth helped deliver 8,000 tons of ammunition used on the beaches of Normandy, and secured the landing of 1,000 soldiers in Cherbourg while the city was still in enemy hands.

Through his military involvement in the struggles that took place in the Channel and off the coast of Normandy (during both D-Day and the Battle of Normandy) and the numerous convoys he was assigned to in extremely hostile conditions, Mr Stephen Alex NEMETH helped secure victory for the Allied forces.

Established in 1802 by Napoléon Bonaparte, this honor, which represents the highest award of the French Republic, can be bestowed upon French citizens as well as foreign nationals. In this way, France demonstrates its recognition towards the men who fought beside her during the Second World War: “France will never forget.”

France, through the Consulate General of France in Miami, has recognized over 1,600 American WWII Veterans in Florida and Puerto Rico since 2008.

Discover some of the ceremony’s pictures below, and all the rest on our Drive: