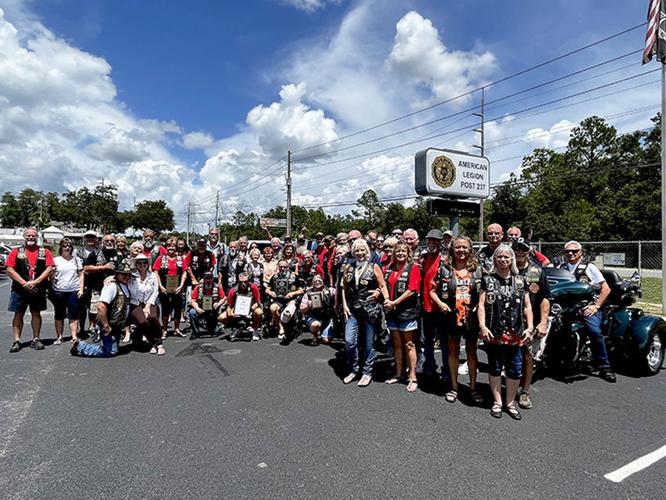 Members of Post 237 of the Beverly Hills American Legion celebrated on July 23 winning the “Riders Chapter of the Year” award from the state American Legion. Photo by Margo Wilson/For the Chronicle

By MARGO WILSON For the Chronicle Jul 28, 2022 ~ It’s not the first time, nor the second … but for the fifth year in a row, the over 100 motorcycle riders of Beverly Hills Post 237 of the American Legion have earned the title of “Riders Chapter of the Year,” outpacing the state’s other 138 American Legion Riders’ chapters with a total of 10,000 riders.

“It’s phenomenal,” said rider Bo Boden, who was attending a July 23 celebration at the post. “It’s a lot of hard work by our leader, John (Roby).”

Roby, who’s directed the Beverly Hills riders group since it was founded in 2012, told the partygoers, “It’s not about one individual. It’s about all of you.”

He saluted members who have passed away and dedicated the event to them. He also thanked the veterans’ and other community groups and individuals who support the post and vets.

We had to go out and earn respect,” Roby said.

Since then, the riders have logged over 1 million miles for charitable causes.

Those rides have earned over $350,000 for veterans’ and community projects and racked up over 1 million hours of community service.

Some of the groups and causes to which they donate include the Race for Fallen Veterans, the Special Olympics, Toys for Tots, Project Vet Relief, Friends of Citrus and the Nature Coast, Veterans for a Cause, Gold Star Families, the VFW, Am Vets, other American Legions, female veterans, and homeless veterans.

They accompany the Vietnam Traveling Wall.

The riders frequently escort, to Bushnell National Cemetery, veterans who’ve passed away. This past year, they placed 5,000 flags at the cemetery.

On “Red Shirt Fridays,” they ride to other American Legions and VFWs to show their support of their fellow veterans.

On Veterans Day, they visit comrades at assisted living sites.

Member Alan Oscarson, a Vietnam veteran, said the award and the riders’ group and Post 237 “mean the world to me. When I came home from Vietnam in 1971, I got spit on at the airport. There were protestors outside. … I felt it was a waste of my time being in the service until I came down here.”

Oscarson said after he moved to the area, he was out for a motorcycle ride one day and Post 237 riders cruised past.

“I followed them,” he said.

He pulled up to Ray Roby, who was commander of the post, and asked him what was going on.

“I’m a Vietnam vet,” Oscarson said. Then, Roby reached over, shook Oscarson’s hand, and said, “Thank you for your service and welcome home.”

Greg Olynyk, the assistant director of the riders group, said he participates because “I do it for the vets. And I like to ride.”

Danny Elsass, of S&S Electric, donated $500 toward the celebration and has supported the post financially many times, according to John Roby.

Elsass said, “I love this group.”

David Herrington, who met his wife at the post and married her June 27, said, “It’s a nice, small group, a fun group. They do a lot for the community.”

Herrington’s wife, Sgt. Maj. Rose E. Gonzalez-Herrington, who has volunteered with Vets for Vets and other groups in Ocala, not only praised Post 237, but her spouse.

“My husband has a big heart,” she said.

She was not the only spouse singing the praises of his or her significant other.

John Roby praised his wife, Karon, who is treasurer and membership chair of the post’s 210-member Auxiliary. She also designed the cake served at the celebration.

And Karon praised John, as well as the members.

“It’s about dedication and camaraderie,” she said.

Bucky Palmer said winning the award “is a great amount of work for the commander and post. … You’ve got to be good.”

Marie Jones said she would echo what Palmer had said, but added, “It’s the friendliest American Legion. It’s very family-oriented.”

Kathleen Moran, the riders’ secretary, said, “No one supports vets like we do. This post is a family.”

Andrea Bolden, an Auxiliary member, whose father, mother, and brother are veterans, said about the award, “It’s fantastic when you think about our little town, and there is Miami, Jacksonville and Tampa. It’s great.”

Ralph Hanks, who served in the Army in Germany from 1966-69, said he loves riding his motorcycle and supports the causes of the riders’ chapter.

“I wish I could do more,” he said. He mentioned the riders have supported hospice programs. Hanks’ wife died in hospice. He credited John Roby for his leadership and said Roby “is probably one of the biggest reasons” for the riders’ success.

David Fredericks, a Vietnam-era Marine, said the riders and post “do a lot of public service for the community.”

Robin Fredericks said the work the post does is “for God and country. … We’re small but mighty.”

Her husband, Ron, who served in Germany with the Army, said, “We’ve been doing hard work.”

But in the end, as Director John Roby said, “Awards don’t make us any better. We’re just committed to our mission.”