BOYS NATION ELECTION ONE FOR THE HISTORY BOOKS 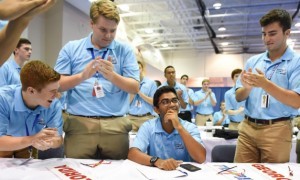 On July 21, the 2015 class of Boys Nation senators elected a president and vice president in grand style.

The young men kicked things off in the same manner the program follows every year. The senators sat quietly and observed the presidential candidates’ campaign speeches. Following the speeches, the senators had a couple of hours to talk to the candidates offline and consider who they would cast their vote for.

After partaking in a meal together and a meet and greet with Jeffery Cole, a Marine Corps veteran who received the Silver Star for his actions in Afghanistan, it was time to vote. With their state signs in hand, the senators lined up and took turns verbally casting their votes for the new Boys Nation president.

The race was close, but Nationalist Aravind Byju, of Osprey, Fla., took home the victory, winning by a close vote of 50 to 46 with two abstentions.

“Right now this whole experience has been absolutely surreal for me, and it really has not hit me,” Byju said. “I am very blessed to be where I am and to have all the opportunity that I have enjoyed.”

Still fired up after the results of the presidency, the boys rolled right into the vote for vice president, which resulted in a tie – the first time in more than 30 years. Luckily, Boys Nation Activity Director and Past National Commander Bob Turner, who has been a part of the program for more than 30 years, knew just how to handle the situation.

“It’s always been said and written that in case of a tie – rather than do the whole (voting) process again – we do a coin flip. Everything went perfect and the young men knew beforehand that was the way we were going to solve it.”

Down to the wire, vice president candidates Federalist Peter Spectre and Nationalist Diab Eid watched as Turner flipped the coin that would decide their fate. After selecting the red side of the coin, Eid’s eyes followed the coin as it flipped in the air, landing on the blue side. Just like that – at the flip of a coin – Spectre’s vice presidency was confirmed.

“It was one of the closest elections I’ve ever seen in my time here,” Turner said. “We have had a lot that were close — even down to one point, but we’ve never had a tie.”

After a quick hug, the two candidates joined the rest of the group to celebrate.

Reflecting on their wins, the newly elected Boys Nation president and vice president said they were thankful to have made it so far in the election process, and they hope to take what they have learned home with them and build on their successes.

“I would not be anything without all of those who have supported me, and I want to thank my Legion Post 159 that sponsored me, and my entire family and my brother who is my inspiration,” Byju said. “I am very humbled, and I can only hope to make everyone proud.”