Barrancas Cemetery Project provides opportunity for Corps of Engineers to give back to veterans, families

By Tim Oberle, USACE Mobile Public Affairs ~ MOBILE, Ala. – When the National Cemetery Administration (NCA) originally approached the U.S. Army Corps of Engineers, Mobile District (USACE), regarding a project to construct approximately 2,500 columbarium at the Barrancas National Cemetery (BNC) in Pensacola, Fl., there was a major caveat. They needed the project complete as soon as possible.

“Over the last few years, our burial numbers increased more than our projections showed, which moved our timeline forward,” said BNC Director Craig LaChance. “So we were up against a wall of potentially having to suspend burial operations for our veteran community. That really left us with no room for error on this project.”

Undeterred by the tight window for completion, USACE Hurlburt Field Office Project Engineer Brian Hilton and his team got right to work with one mission in mind. To make sure our Nation’s veterans and their families received the dignified burial that their service and sacrifice demands.

“No one wanted to be the reason that you had to tell a veteran or family that they couldn’t use the facility because we weren’t done,” said Hilton.

With this motivation looming in the backdrop, Hilton and his team analyzed the project for issues that could potentially delay their target date for completion.

“We started at the beginning of January 2016 and had 365 days to complete the entire project,” Hilton said. “But we only had until April 30th to complete Phase A, so it gave us four months to build around 700 columbarium. I have to admit every day during those first four months, I was worried that we weren’t going to meet our deadline.”

“To ensure that we never fell behind and completed the project on time, we basically camped at the construction site and took every precaution to mitigate potential delays,” he continued. “Randy Blessinger, who was the Quality Assurance [Officer] on the project, came here every single day and

spent a lot of time making sure that little issues never turned into big issues. Then I would come by multiple times a week and… if need be I would get [my boss] to come out. Through that layered approach we were able to identify potential issues, correct them, and move forward in a very short period of time. That was probably the key and it really is a testament to partnering.”

Hilton and his team finished Phase A of the project with three days to spare, and were able to finish the rest of the project almost four months ahead of schedule. Finishing both phases of the project early gave LaChance a much needed sigh of relief.

“You can never project when something might go wrong that puts a construction project off schedule,” said LaChance. “Fortunately, we didn’t have any of those. Once the Corps turned over the early set of columbarium walls it took a lot of the pressure off not only them, but us too.”

In addition to time restraints, the NCA also required the project to be done within the high standards for which their organization is known.

“We have a list of standards that we have to maintain,” explained LaChance. “Whether it is the quality of the turf, the alignment of the headstones, damage to headstones, the way our facilities look, or the accessibility of our facilities. The requirements are very high because we want our visitors to have the best experience possible, during the most difficult times in their lives.”

This presented some unique challenges for Hilton’s team, while trying to get the work done as quickly as possible.

“One of the challenges that we had was the NCA had very exact specifications for how things needed to look,” explained Hilton. “There were bumps in the road, but because everyone was working together we were able to get it done. When it was finished the [renovations] looked great and the end result is something you can be really proud of.”

In addition to the columbarium, the USACE repaved roads and rebuilt curbs throughout the oldest part of the cemetery. The area is one that has a high impact on visitors, so this part of the construction required a delicate approach.

“Any kind of prolonged delay could have produced a really bad result for us,” said LaChance. “But with the Corps’ help we were able to have minimal disruptions to our visitors.”

This was never more evident for LaChance then Memorial Day weekend, which happens to be one of the busiest times of the year for the BNC.

“During Memorial Day they were able to come up with a plan where they built us safe entrance and exit ways in and out of the cemetery,” said LaChance. “[That] really stood out more than the rest of the time because there was such a minimal disruption to our veterans and families.”

“From the start of the project, the priorities that the Corps put out were in-line with what we needed,” he continued. “Even down to the smallest details, they made sure everything was up to standard and far exceeded our expectations. It truly is a beautiful complex.”

While Hilton and his team appreciated the compliments from LaChance, it was something else that motivated them to do their best work.

“Our best compliment is when veterans and families go there and they don’t notice any issues,” said Hilton. “That is when you know you’ve done your job right.” 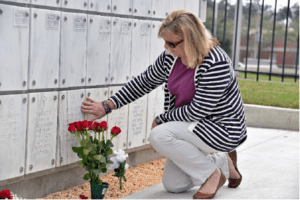