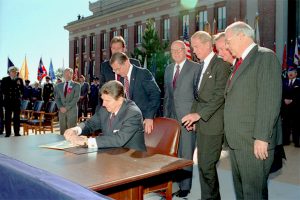 The long-standing objective of the Legion to improve adjudication procedures for veterans’ claims is achieved when the U.S. Court of Veterans Appeals becomes operational. Most of the provisions contained in the law creating the court were originally included in the Veterans Reassurance Act, written by the Legion and introduced in Congress in 1988.