The Legion sponsored Freedom Bell goes aboard the Freedom Train during its tour of the country in celebration of the U.S. Bicentennial. Six years later, the bell is dedicated at its permanent home in Columbus Plaza, opposite Union Station in Washington, D.C. 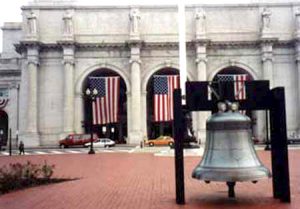