In the midst of a VA waiting-list scandal that reached up to forty deaths of veterans waiting for care, The American Legion calls for the resignations of several top officials, including VA Secretary Eric Shinseki. The scandal would ultimately engulf multiple facilities and offices; the Legion kept the issue in front of the public and Congress via articles and testimony. 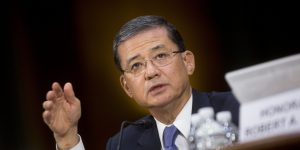