June 28, 2017, B.C. Manion, The Laker ~ When American Legion Post 108 formed 80 years ago, it had its preliminary meeting in an old house on Denny Johnson’s old grove, on Lake Fern Road, according to club records.

About 10 veterans gathered for that initial 1937 meeting.
Next, they met in an old store building on U.S. 41, then known as Route 41, near the Superette.

After that, the group met for several years at the old Boy Scout Hall, with the Auxiliary members gathering in another room at that hall, according to an account published in a 1963 club newsletter. 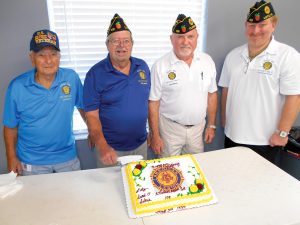 Flash forward eight decades to the present: The group is still active, but is seeking a permanent home — and more members — to increase its vitality.

It would like to expand its activities, but it is difficult to fit into another organization’s schedule and it doesn’t have the financial means to purchase a permanent home.

When Post 108 was formed, it had 22 charter members. Over the years, membership has waxed and waned.

The post’s charter members must have been veterans of World War I, Watson observed.

Post chaplain Fred Wilsky has firsthand knowledge of how the post got started: “The guy who went out and recruited those members was my dad. He was a member of the Sulphur Springs Post.

It was during the Depression, he noted, “it was expensive for everybody to drive all of the way down there for a meeting, so they wanted to have a post out here,” said Wilsky, a member of the Army Air Corps who served in Guam.

N.B. Shewfelt, the post’s adjutant in 1963, offered a glimpse into the organization’s character in a February 1963 issue of the Lutz Legion News.

“Post No. 108 somehow keeps going right along doing their job of looking out for the interests of veterans, their widows and orphans,” Shewfelt wrote.

Some members have been lost to death, said Post Commander Ray Mason. “We lost two veterans this year,” noted Mason, who served from 1962 to March 1968 in the Navy as a commissary store keeper.
One of those veterans who died was Granville Kinsman, a fighter pilot in World War II.

“He supported ground troops and escorted bombers to their destination,” Mason said.

The attendance at his funeral was gratifying, Mason said.
“Oh, my God, it was packed,” Mason said.

Post members say their experiences in the armed forces give them a particular kind of camaraderie with others who have shared the military life.

The organization presents two medals and two certificates at several local elementary and middle schools. The schools select the recipients. One medal goes to a boy and one goes to a girl. An honorable mention certificate also is awarded to a boy and to a girl.

“Sometimes we get invited,” Watson said. “The schools sometimes tell us what these kids have done to get selected. It is fantastic. It gives you a whole new perspective on public schools.”

At the high school level, there’s an oratorical contest, with cash awards.

The national winner gets an $18,000 scholarship, Mason said.
Presenting the awards has been a long tradition, Wilsky said.
“The post has been doing that since the beginning. My sister (Virginia) won it in 1939 or 1940,” he said. It was quite an honor, he said. It was “an affirmation of good character and studying hard and everything good about a person.”

The post needs more members so it can be of greater service, said Watson, who is retired Navy and who served from 1956 to 1974. The post could also participate in more programs that are available that are supported by the national organization.

Jim Evans said the post owes deep thanks to Vince Nasso, a former adjutant for the post.

“When I joined here, I actually came from a Tampa post. There was probably no more than four or five active members. It was terrible,” said Evans, who was an Army intelligence analyst in France for three years, served in the Army Reserve for 15 years, then went back on active duty in the first Gulf War as a senior counterintelligence agent.
When Evans attended his first meeting, Nasso was the only one there. Nasso, who has since passed away, was determined to keep the post going, Evans said.

Belonging to the post is important, Evans said, because he wants to support the American Legion’s mission.

Plus, he enjoys reconnecting with people who served, he said.

“You live in communities that probably have veterans, but you may not even know it,” Evans said, adding he has a special affinity for veterans.
“I realize what most of them have been through,” he said.

Elaine Stoots, the post’s new historian, said she wants to help keep the organization alive because “we are losing some of the American ideals that founded this country.

“A lot of the rest of the world is looking to us for leadership and example. Who is going to provide it?” asked Stoots, who served from 1984 to 1990, stationed at Hahn Air Base Germany and at Grand Forks, North Dakota.

American Legion Post 108 is looking for a permanent home. Members believe that having a home of their own would help to increase membership, which, in turn, would bolster the group’s vitality. For more information, contact Lyle Watson at (813) 996-5917 or Ray Mason at (813) 994-1214.