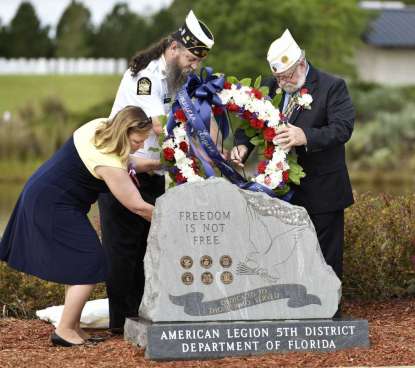 [email protected] Kelli Becraft (from left), Walter Rasco and Joe Magee lay a wreath during the dedication of the American Legion Family Monument at the Jacksonville National Cemetery.

The Florida Times – Union, Teresa Stepzinski ~ Shade was scarce, the sun brutal and the humidity stifling. But impervious to it all, veterans from throughout Northeast Florida and beyond stood shoulder-to-shoulder with pride Saturday morning to honor fallen comrades, spouses, sons, daughters and friends at Jacksonville National Cemetery.

Veterans from all branches of the military — journeying by motorcycle, car and van — came together for the dedication of the American Legion Family Monument at the 546-acre cemetery. Donated by the 5th District American Legion, Department of Florida, the monument represents three years of planning and fundraising by local posts, units and chapters of the American Legion in Duval, Clay, Nassau and St. Johns counties.

“This is a big deal for us and all our members,” said Fred Matthews of Jacksonville, 5th District commander.

The monument is for the living as well as those who’ve made the ultimate sacrifice, said Matthews, an Air Force veteran.

“To me, it’s another opportunity for us to, not so much pay tribute but keep in remembrance those who in many cases volunteered their services that resulted in the loss of their life in defense of our great country,” Matthews said. “The other part of it is for those of us, the living … For those of us who are still alive, to keep in mind, the purpose for our existence. … Why many of us joined the military and the sacrifices that our families made while we gone. And it’s to keep in mind those who are currently actively serving.”

Matthews said its also to say “America remembers, America cares and we appreciate what they’ve done and will do in service of justice, freedom and democracy.”

Several in the crowd blinked away tears that welled up in their eyes, while others clutched their spouses’ hands tightly throughout the emotional ceremony and unveiling of monument bearing the words “Freedom Is Not Free.” First coined by retired Air Force Col. Walter Hitchcock of New Mexico Military Institute, the phrase expresses gratitude to the members of the military for their service to the country in protection of our freedoms. Matthews said the auxiliary unit helped design the monument.

Matthews said the four-county American Legion district is composed of more than 7,000 active-duty and retired veterans and their families in Northeast Florida. Many turned out for the dedication held on the eve of the 15th anniversary of the 9-11 terrorist attacks.

Hill said each person at rest in the cemetery has a different story to tell, but all made sacrifices for their country whether “it is a wife who briefly but anxiously dreaded every doorbell ring or telephone call she received while her husband served in Vietnam, or a World War II veteran who witnessed unspeakable horrors while fighting in hard-to-pronounce islands in the Pacific.

“They all made sacrifices that many Americans take for granted. They deserve to be buried in a peaceful setting such as this. They deserve to know that the American Legion cares and appreciates their sacrifice.”

The American Legion, Hill said, “recognizes that our government, nation and way of life can endure only as long as there will continue to inspire a devotion and loyalty that will not wilt in the face of death itself.

“Make no mistake about this, it takes real courage to put on the uniform of our country in time of war and even during temporary peace. Those who take the oath of military service do so with the full knowledge that their uniform may become a warrior’s shroud. Men and women do not do that unless they prize some things more than life itself.”

Tom Gora, past district commander and chairman of the monument committee, said many veterans will choose the serene, beautiful grounds of Jacksonville National Cemetery as their final resting place — joining more than 11,000 veterans and family members interred there now. Many were members of the American Legion, he said.

Noting retreat is sounded at sunset in the military when the colors are lowered, Gora said he can imagine the legionnaires members interred at the cemetery saying “let’s go visit our American Legion family. I’ll meet you at the American Legion Monument after retreat.”

Gora said that is the way he looks at the monument, and he hopes others will view it that way too.

‘SPIRITS OF THE PEOPLE’

“Every time you come out here to see the monument, to put down a wreath or a flower or to say a prayer, the spirits of people from your legion family will be with you as well,” said Gora who along with fellow legionnaires Robert Brewster, Roy Havekost and Tom Harris composed the monument committee. The monument was paid for with funds raised through raffles and other events with the American Legion Riders — organization members who also are motorcycle enthusiasts — at the forefront.

Gora lauded Alpheus Richberg, director of Jacksonville National Cemetery, and its crew of 11 as instrumental in making the monument happen. Richberg said it was their honor to serve.

The National Cemetery Administration, Richberg noted, is basically founded on these words from President Abraham Lincoln: “To care for him who has borne the battle for his widows and for his orphans.” 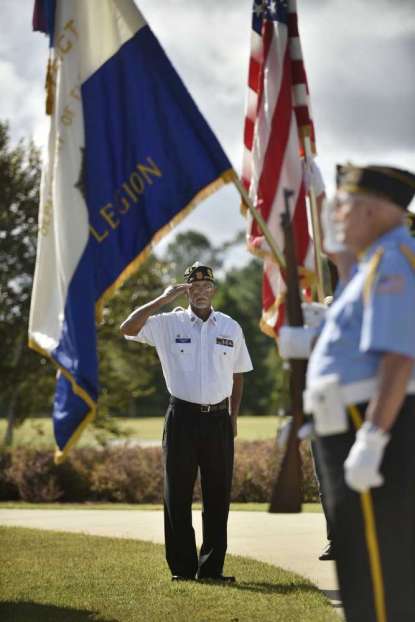 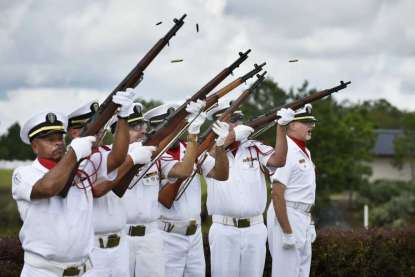 [email protected] Members of the Beaches Honor Guard fire a gun salute during the dedication of the American Legion Family Monument Saturday. 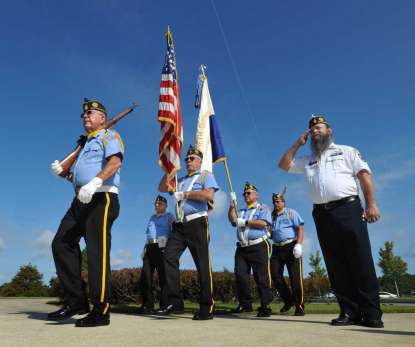 [email protected] Members of the Color Guard from American Legion Post 137 march at the beginning of Saturday’s ceremony to dedicate the American Legion Family Monument at the Jacksonville National Cemetery.