September 2019
PARLIAMENTARY AUTHORITY AND ROBERT’S RULES
Roberts Rules are an essential tool for American Legion Post’s or any nonprofit organization.

Meeting Minutes Made Easy
It can be difficult to track what is being said at a meeting when the conversation strays from topic. By using motions, in accordance with Roberts Rules, the tracking of meetings becomes easier to document. And straying off topic, a common problem for many meetings, becomes easier to recognize and correct.

Everyone Has a Voice
The process of Roberts Rules ensures that everyone has an opportunity to speak on a topic. A good meeting facilitator will use Roberts Rules to check in with every person at the table and give them the chance to speak.

Roberts Rules Means Freedom
I know it sounds funny to think that a more formal process will result in more freedom, but it is true. Anyone who has run a meeting, at some point, has found themselves more caught up in the “running the meeting” that actually paying attention to what is being discussed. But with a firm grasp of Roberts Rules, the meeting facilitator can relax and let Robert Rules run the meeting for them. This will allow them to play a more active role in the meeting itself.

Better Use of Parliamentary Procedure
Running a meeting by proper parliamentary procedure is smart for two reasons. First, it helps to avoid legal challenges to your actions; second, it produces better, more productive meetings.

While a lengthy and badly run meeting can cast a pall on all other accomplishments during the year, a successful and well-run meeting will please and invigorate members. 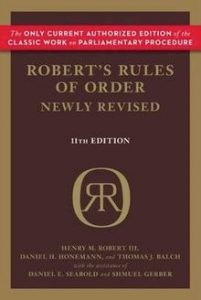 There are several major parliamentary books, with Robert’s being the most popular. It is used by approximately 85 percent of U.S. organizations as well as The Congress of The United States. Robert’s is the most widely used book as well as the easiest to use as a parliamentary authority. Robert’s is an excellent resource for leaders. The book includes sections on presiding, running elections, writing and amending bylaws, counting votes, and holding board and committee meetings. Robert’s is fairly easy to find-just be sure to buy the right one. There are numerous Robert’s “clones” and earlier editions that are easy to pick up by mistake. Identify Robert’s Rules of Order by its publisher, Da Capo Press, and by the number of pages (716). It’s available in both hardback and softcover.

ADOPT WRITTEN RULES
Most groups formally adopt written rules of procedure such as bylaws. The group normally approves a bylaws provision that a particular book shall be the parliamentary authority. The procedural rules in that book then govern the association in all cases in which the rules are not inconsistent with higher authority, such as state or federal law or the governing documents such as your Constitution and Bylaws. This parliamentary authority can also be supplemented with specific rules, such as standing rules, to cover specific situations.

CONCLUSION
In summary, take time to familiarize yourself with proper parliamentary procedure. Such knowledge can enhance leadership credibility, produce better meetings, and make the difference between official actions that stand up in court-and illegal ones that don’t. Lastly, ALWAYS use you Officers Guide and Manual of Ceremonies first to use proper procedures.

Reference:
The following publication is available, in PDF Format at:
https://www.legion.org/publications
INTERNAL AFFAIRS
The American Legion Officers Guide and Manual of Ceremonies
56th. Edition, Revised March 2019
Page 114, Second Paragraph.
“PARLIAMENTARY AUTHORITY – It is important for every organization to adopt some authority on parliamentary law, and for the members to be familiar with both the specific and the general rules of the organization. A copy of the by-laws should always be on the commander’s desk. Excellent books and small leaflets on parliamentary procedure have been written in simplified form and are available, but “Roberts’ Rules of Order Newly Revised” is the accepted authority for The American Legion.”

We regret to inform you that Dennis Thompson passed away February 15th, 2020 in hospice. Dennis obtained his membership in The American Legion as a US Army Combat Engineer serving a year in Vietnam. He served several years as American read more >
read more >