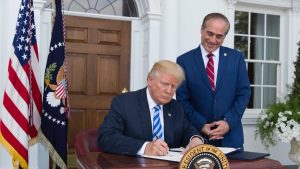 The American Legion, in concert with others, creates, advocates for and passes the Harry W. Colmery Veterans Education Assistance Act of 2017. Named after the author of the original GI Bill and Past National Commander of The American Legion, the new GI Bill improves upon the great foundation that already existed, removing the burdensome cap to use the education benefit, along with many other great additions to the legislation aimed at improving the lives of veterans and their families.